Skip to content
👋🏻 Keystone 5 has officially moved to maintenance only. For the latest release of Keystone please visit the Keystone website.

Looking for v4 or Keystone 6 docs ?

Note: This is a conceptual introduction to how the Keystone team think about GraphQL APIs (and hence how Keystone's GraphQL API is generated). For more specific API docs, see the GraphQL API Introduction.

A good GraphQL API is a combination of the following criteria:

Modelled with CRUD (Create, Read, Update, Delete) operations, this covers the majority of functionality for most applications.

For example; the User type would have createUser / getUser / updateUser / deleteUser mutations.

Become apparent over time while building applications and adding to the schema. 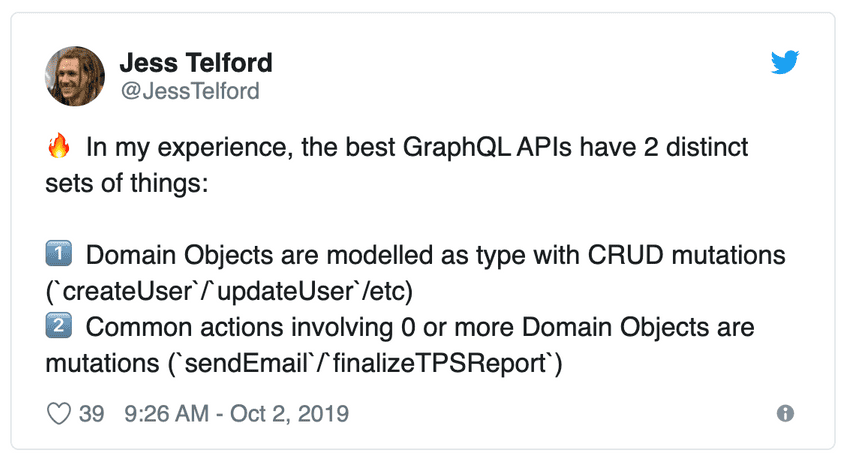 Every thing in your application / website / database which can be queried or modified in some way is a Domain Object. Each Domain Object has its own set of CRUD operations.

By modeling a schema in this way, it enables fast iteration with a consistent and predictable set of mutations and queries for every Domain Object.

Tip: Because an Image may be uploaded and interacted with independently of a Post, or used across multiple posts, we're creating an Images list. Even if they're only used in a single Post, they still meet the definition as a thing which might be queried or modified in some way (for example, querying for a thumbnail version of the image, or updating alt text).

In general, Domain Objects map to Lists in Keystone:

To fully leverage the Graph of GraphQL, relationships between Domain Objects must be defined in a way that allows for both querying and mutating related data.

GraphQL gives us querying thanks to their type system:

Here you can see the Post.author field is defined as a relationship to a User. When doing a query, it follows a predictable pattern:

Hint: Keystone implements this pattern with the Relationship type

For example, imagine a UI where an author could update their bio at the same time as creating a post. The mutation would look something like:

Note the data.author.update object, this is the Nested Mutation. Beyond update there are also other operations you may wish to perform:

Note: Since get is a query concern, and we're only dealing with nested Mutations, it is not included here.

Custom operations are an emergent property of the schema design. They are not something which should be defined up front.

As products are built, it will become obvious which operations are missing and what their inputs/outputs should be.

For example, while building out the TPS application, it became evident that at some point a TPS Report had to be printed and handed directly to a boss. There is no CRUD operation which can trigger printing a report. There are, however, the Printing and Courier services. A custom mutation can be made which uses both those services to complete the operation: submitTPSReport.